Steve in Vietnam: Seeking, Above All, a Cultural Experience

In October, Steve had some time between jobs and wanted to seize the opportunity.

“I know how rare it can be to have a break once you start working,” says the former U.S. Marine. “The problem was, I had done absolutely zero planning. I had no idea where I was going to go, how I would get there and what was I going to do.”

Steve found the ELI website, was attracted by its programs in Vietnam, a country he’d always wanted to see, and was on a plane to Ho Chi Minh City six days later.

His placement may sound surprising -- for three weeks, Steve taught English and helped out at a shelter for young unwed mothers -- but he chose it partly because it was different, and partly because he felt it would give him a unique glimpse into the culture. As someone who’s traveled throughout Europe and in Australia, he knew that to get to know a country, you first have to get to know its people.

“I was a little nervous at first,” Steve admits. “But the Vietnamese people are incredibly friendly and after a few days, I started to feel more comfortable.”

He was met at the airport by ELI’s coordinators who took him to his guest house, showed him a bit around the city, and signed him up for a language class.

“I wanted to know some basics,” Steve says, “to help me out and to show respect to the local people.”

It proved to be a great door-opener. “Just trying to speak a little Vietnamese gets you a lot of good will.”

And invitations. Steve says, several people engaged him in conversations -- in English -- and even asked him to join them for coffee or dinner at home.

ELI arranged for Steve to live in a private room at a guesthouse located in the heart of Ho Chi Minh CIty’s bustling tourist area, which Steve laughingly describes as “loud, young and entertaining.” The neighborhood attracted travelers from all over the world. “In many ways, it was the place to be,” he says.

During the day, Steve focused on his volunteer placement. The shelter where he worked was about half-hour away from the guesthouse. It served about 30 residents, young women who were pregnant or had recently given birth.

Steve babysat when he had to. “But I found out I wasn’t a natural caretaker,” he laughs.

He much preferred teaching English.

“I have no training in language instruction,” Steve says. “But I started with real basics: the alphabet and numbers. With the slightly more advanced students, I worked on simple conversations, the kind of conversations I wanted to be able to have in Vietnamese.” A nun who worked at the shelter took more advanced classes as part of English certification she needed to work in Sisters of the Sacred Heart sites in other countries. 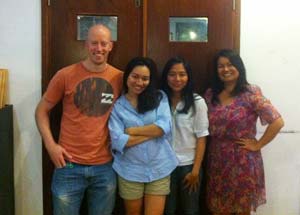 Weekends were devoted to travel. He took a journey to explore a jungly National Park and joined a group of ELIers on a trip to Vung Tao.

“It’s a coastal city that has a very beautiful beach. We had an amazing time.”

Now back at home, in a gray and rainy San Francisco, Steve looks back at his time in Vietnam with a sense of wonder - and desire to go back.

“The Vietnamese people are very welcoming. It’s a courteous culture, and very social. People leave their doors open to the street, businesses put out chairs outside to encourage visiting and chatting.”

Perfect setting for making personal connections and becoming part of the local culture: exactly what Steve was looking for in his Vietnam adventure.