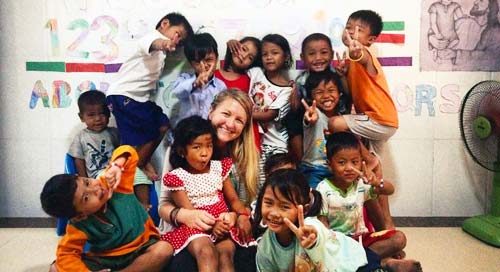 Julie volunteered with ELI in Cambodia knowing she’d have an amazing adventure; the fact that it may have changed her life is just a bonus.

What happened? A stint at the Joy Daycare in Phnom Penh opened Julie’s eyes to new possibilities.

The North Carolinian wasn’t new to Asia - she’d previously spent some time in Thailand - but Cambodia still took her a bit by surprise.

“I knew Cambodia is poorer than Thailand, but it was still startling to see just how much more poverty you see there.” 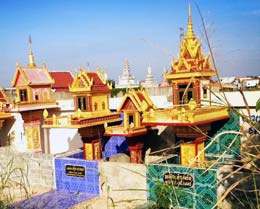 Julie’s contact with the poor was first-hand: she worked at a facility created especially for children of rag pickers, the poorest of the poor. Each morning, a van would drive along some of the city’s most impoverished areas, picking up children who lived on the streets, or shacks along dump sites. The youngsters - age 2 to 6 - would be driven to Joy Day Care, where they’re lovingly looked after by a staff of teachers and volunteers. In the late afternoon the same van takes the children home.

Julie went on the van ride one morning.

“It’s heartbreaking to see where the children live,” she remembers. “It’s not that they don’t come from loving families. You could see some of the children crying before getting into the van, they’re deeply attached to their parents. But they live in such terrible conditions, and Joy is a welcoming, cheerful escape where they can thrive.”

When they first arrive at Joy Day Care, the youngsters take showers and put on school uniforms while their own clothes are washed and dried. Julie worked with 5 and 6 year olds who were fairly independent - Joy emphasizes self-reliance - but the little ones often need a helping hand with washing and dressing. Julie remembers especially enjoying braiding the girls’ hair after their showers, something the kids loved as well. After a morning snack of fruit, the kids would sing songs, play and have some lessons followed by lunch and naptime.

Julie and other volunteers would join Joy Day Care teachers for lunch, which Julie brought from the hostel where she lived. Most of the the teachers spoke English, and all were both welcoming and grateful for volunteers’ help.

Afternoons at Joy included another shower, getting dressed in the children’s own clothes, snack, lessons, and cleanup before the little ones returned home.

Julie helped with everything, and in particular enjoyed her classes, where she’d organize activities, teach shapes, colors and basic English.

“Sometimes the kids would pretend they didn’t understand,” she laughs. “I’d tell them, ‘sit down,’ and they’d look at me like, ‘hmmm?’ Well. I know they heard ‘sit down’ before!”

Occasional lapses aside, Julie says, the kids are well behaved and loved learning and taking part in activities.

“I noticed they especially enjoyed having tasks to complete, little projects to work on.”

Since resources at Joy are scarce, Julie and the other volunteers would create their own worksheets and projects to keep the little ones challenged.

“I wish I had brought some preschool materials with me from the States. I looked for them in Phnom Penh, but stuff like that is hard to find, especially in English.”

As other ELI volunteers, Julie lived in a hostel in central Phnom Penh. At first she had a single room. 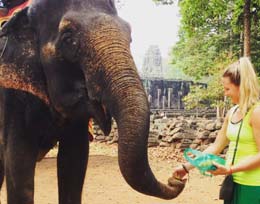 “I’ll be honest, it was very modest, and I did feel some culture shock,” she says. “But then I moved into a double room with another volunteer, and that was nicer. It was actually the kind of room a typical middle class Cambodian would live in.”

Three meals a day were included at the guest house, simple Cambodian and Chinese-influenced dishes and what Julie laughingly describes as “Cambodians’ reinterpretation of western food.”

When she wasn’t working, Julie and the others would explore Phnom Penh, a city she says was lively and friendly. While she was often warned to be cautious and on the lookout for pick-pockets, she experienced no problems, and felt safe, just as she did during the weekend trip she took to Otres Beach and Sihanoukville.

“I was amazed how beautiful the beaches were,” Julie says. “And I spent time in Thailand, so I’ve seen some impressive beaches!”

She also raves about her weekend trip to Siem Reap and its magnificent ancient temples of Angkor Wat.

“I rented a bike for a dollar per day,” she says. “And I just spent all my time going from temple to temple. It was amazing.”

Now back in the U.S., Julie is considering her future.

“Seeing the poverty the Joy kids lived in tugged at my heart strings,” she admits. “But working with them, seeing them learn and thrive opened my eyes to teaching. So I’m seriously exploring education as an option.”

Going overseas is something Julie recommends to everyone, especially for those who aren’t sure of their direction in life.

“Volunteering helped me find my passion. There’s nothing like traveling, and if you’re going to go, you might as well make a difference, too.”